Solidarity to striking workers, to your families, and to the Communications Workers of America.

“Bell benefits from the hard work and innovation of Unifor members,” said Jerry Dias, Unifor National President. “Instead of treating them with respect, the company has continually eroded our jobs and inflicts a stressful work environment on current employees.”

Unifor members have experienced a decrease in the number of jobs in virtually all Bell bargaining units across the country in recent years. Earlier this year, the union discovered Bell had taken action to outsource 1 million installations of its new “Wireless to the Home” technology, a project partially supported by federal grants.

At today’s rally, Bell workers from across the region marched alongside delegates of Unifor’s National Convention to the Bell building, where together, they called on the company to maintain good jobs in Canada’s telecommunications industry, and not outsource the jobs of tomorrow.

“At a time of growth and new technology, coupled with an affordability crisis for Canada’s workers, corporations like Bell must show leadership with decent work and job security,” said Renaud Gagné, Unifor Quebec Director. “It is immoral to take millions in government subsidies while outsourcing good, unionized work.”

Employees of Bell Canada and Bell subsidiaries have long campaigned against contracting out and other forms of job erosion. These efforts recently led to the company reversing a layoff notice for 78 technicians, and won the removal of the infamous “Stacked Ranking” performance management system in the Bell Sales bargaining unit.

For current updates about this campaign, visit bellrealtalk.ca.

Unifor is Canada's largest union in the private sector, representing 315,000 workers in every major area of the economy. The union advocates for all working people and their rights, fights for equality and social justice in Canada and abroad, and strives to create progressive change for a better future.

To:       All Bell-related Locals across Canada

Today, Unifor has filed an Unfair Labour Practice complaint against Bell Canada for their failure to disclose the scope of the Wireless to the Home project during Bell Craft bargaining in 2017, and again during BTS bargaining in 2018 where the tripartite agreement covering residential installation work was also renegotiated.

Additionally, in the complaint, we have also raised how the entire project was contracted out as pay back for the union exercising our legal right to represent our members in a way that Bell Canada was not appreciative of (this according to Declan Brady, Senior Vice President of Operations, Bell).

In the coming weeks and months members can expect a series of escalating actions aimed at repatriating this work for members of Unifor.

Please continue to support your bargaining committees, local representatives and your national union as we fight for this work and the end to erosion in all of our bargaining units.

Please visit our website at Bellrealtalk.ca for the latest updates.

TORONTO- Unifor has filed an application with the CIRB claiming that Bell Canada is the rightful employer of technicians and clerical workers at Expertech, insisting that members should be bargaining with Bell Canada.

“What we’re saying is that Expertech is a puppet, owned and controlled wholly by Bell Canada,” said Jerry Dias, Unifor National President. “We don’t bargain with puppets. Unifor members deserve to sit across the table from their employer, Bell Canada.”

On Tuesday, May 21, Unifor submitted a common employer application for Expertech technicians and clerical workers to the Canada Industrial Relations Board (CIRB), claiming that Bell Canada is the real employer and not Expertech, consequently, these members ought to be covered by the Bell Canada Craft and Clerical collective agreements.

“This application is one more way that Unifor is defending good jobs in Canada’s telecommunications sector now and for the next generation of workers,” said Renaud Gagné, Unifor Quebec Director. “Bell has tried to sell these workers short by creating Expertech, but our position is that Expertech is Bell Canada, and our members deserve better.”

Bell Canada created and is now the sole owner of Expertech, and has been steadily decreasing the work allocated to members at Expertech. The union has witnessed the absolute control Bell has on Expertech’s contracts, resulting in business decisions that has led to layoffs and displacement of good unionized telecom jobs.

Employees of Bell Canada and Bell subsidiaries have long campaigned against contracting out and other forms of job erosion and will continue to do so.  For current updates about this campaign, visit bellrealtalk.ca.

Unifor is Canada's largest union in the private sector, representing 315,000 workers in every major area of the economy. The union advocates for all working people and their rights, fights for equality and social justice in Canada and abroad, and strives to create progressive change for a better future. 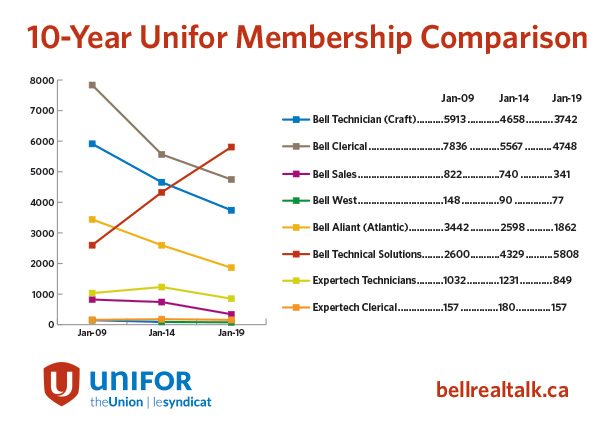